Do you need an ACL to play recreational sports?

A paper published in December 2017 by Turkish physicians in the journal Acta orthopaedica et traumatologica turcica weighed in on the ACL surgery or not debate.

“Whether surgical or conservative treatment is more effective in allowing patients to return to physical activity after anterior cruciate ligament (ACL) injury is controversial. We sought to compare mid-term outcome measures between isolated ACL tear patients who underwent reconstruction followed by closed kinetic chain exercises and those who underwent neuromuscular training only.”

Okay so in this study, what was the outcome?

“No statistical difference was observed between the groups for any of the parameters evaluated, including assessment of subjective knee function, one-leg hop test, assessment of joint position sense, muscle strength, and the health profile.”

“Our data suggest that early surgical reconstruction may not be a prerequisite to returning to recreational physical activities after injury in patients with ACL tears.”(1)

Is ACL reconstruction surgery a guarantee to return to play? Hardly

New research from Brown University presents the return to play reality: “Accelerated rehabilitation has made recovery from surgery more predictable and shortened the timeline for return to play (From ACL reconstruction surgery). (However) Despite success with advancements in anterior cruciate ligament reconstructions, some athletes still fail to return to play.”(2)

ACL reconstruction does provide remarkable short-term knee stability.  Unfortunately, the stability doesn’t last because no matter how hard the surgeons try, they can not simulate exactly the same biology pre-injury. If a patient has grade 3 ligament tear, and the patient deems the ACL necessary, surgery is indicated. The cadaver or tendon graft that is replacing the torn ligament, however, will not function long-term like the original ACL.

The long-term results from many studies demonstrate that untreated joint instability remains. Doctors from the Hospital for Special Surgery and Cornell Medical Center Program in New York reported in the Orthopaedic journal of sports medicine of the over 23,000 pediatric patients who underwent ACL reconstruction:

The median time lapse between the first and second surgeries were 1.4 and 1.6 years, respectively.(3) It was noted that this may be a conservative number of patients who had repeat tears, as the data only included those who underwent a second surgery, and not those who decided not to have the additional surgery.

This is pointed out by Italian researchers who in part blame the ACL failure on compromised ligaments and the meniscus of one or both knees. Published in the Sports medicine and arthroscopy review, here are the highlights of this research: 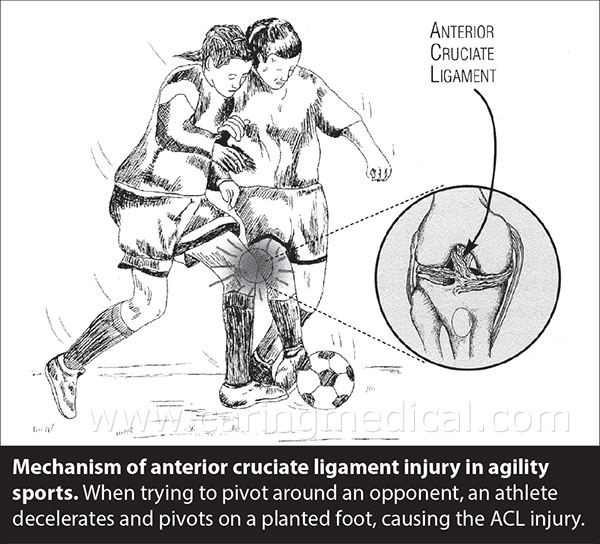 As mentioned above, one of the main reasons for having the ACL surgery was the ability to return to sports. For many this was not achieved.

Doctors from the Karolinska Institutet in Sweden found that patients saw no real choice between operative and non-operative treatment. Athletes perceived surgery as the only way to fully return to the pre-injury level of sports, and surgery was understood as the only way to become a completely restored “functional human being”.

A major source of frustration to the patients was that the progress during the ACL rehabilitation process did not match their expectations, fear of re-injury became common.

Some participants because expectation of surgical success was not met decided not to return to their sports.(6)

So there is a question as to whether or not ACL reconstruction surgery is the best option. Here is a study on high school and college football players.

This question, whether or not ACL reconstruction is the best option, was further raised by researchers at Vanderbilt University Medical Center. Doctors there noted the lack of data regarding the effect of anterior cruciate ligament reconstruction on the ability of American high school and collegiate football players to return to play at the same level of competition as before their injury or to progress to play at the next level of competition.

Although two thirds of players reported some “other interest” contributing to their decision not to return, at both levels of competition, fear of reinjury or further damage was cited by approximately 50% of the players who did not return to play.”(7) Results that mimic those cited above.

Recently researchers in the United Kingdom put together a paper on best practices of when and type of ACL surgery to consider.

Here is a summary: The aim of ACL surgery is to restore functional stability to the ACL deficient knee. ACL reconstruction can be performed using a variety of different surgical techniques as well as different graft materials.

Timing of any ACL reconstruction is also crucial, it is commonplace to allow the acutely injured knee to settle, giving time for resolution of swelling, restoration of range of motion and recovery from of concomitant ligament injuries. (I discussed this above in regard to meniscus injury).

Furthermore a delayed reconstruction allows patients to try conservative therapy to see if surgery is indicated. (This is discussed at length below)

The three categories of commonly used grafts are:

Often a patient will come into our office and report that they have a complete or a partial ACL tear and they want a second opinion on whether ACL surgery is necessary.

Generally with a documented complete rupture, the patient has a choice of reconstruction surgery or non-surgical options. The non-surgical options would include first: A realistic assessment of future activities on an ACL-deficient knee. Some patients exhibit little or no symptoms when they play low-demanding sports or activities.

Here are the arguments for operating on a partial ACL tear:

This is what doctors at Oxford University asked: They suggest that patients should always take caution when any type of joint surgery is recommended, and reconstruction of the anterior cruciate ligament (ACL) is no different. It is widely known that many patients who undergo ACL reconstruction experience a chronic “giving way” feeling after the surgery and some encounter a re-rupture of the tendon.(10)

The realities of non-surgical ACL regeneration

Doctors at the Department of Trauma Surgery and Sports Injuries, University Hospital of Salzburg wrote in the Archives of orthopaedic and trauma surgery:

“The ACL has the potential to heal upon intensive non-surgical rehabilitation procedures. Several biological factors influence this healing process as local intraligamentous cytokines (messengers that call for more inflammation (healing)) and mainly cell repair mechanisms controlled by stem cells or progenitor (creator) cells. Understanding the mechanisms of this regeneration process and the cells involved may pave the way for novel, less invasive and biology-based strategies for ACL repair.”(17)

This research suggests that one day doctors will be able to grow a new ACL in the laboratory and implant it into a knee. That is fantastic news for the people of the future but what about today? Is there a way today to non-surgically repair a damaged ACL? Do you even need to replace the ACL?

Another team of Chinese researchers writing in the medical journal International orthopaedics noted that the ACL has certain self-healing abilities after acute injury. These self-healing abilities have to do with stem cells (for a detailed discussion on how stem cells work please see my article on stem cell therapy). The Chinese team suggested that leaving behind part of the ruptured ACL remnant would release native stem cells into the new graft and augment healing. In addition, taking stem cells from the remnant ACL may be a potential source of seeding cells for ligament regeneration.(12)

This research found agreement in the work of Korean doctors who wrote in the medical journal Current stem cell research and therapy of recent developments in mesenchymal stem cell (MSC)-based approaches for enhancing healing after ACL injuries. They suggest that stem cells are a promising treatment options for enhancing biologic healing of ACL grafts and restoring the functional properties to the levels of the native ACL, and ultimately improving clinical outcomes.(13)

The complexity of an ACL tear – Is it full? Partial? Can it regenerate on its own in the proper circumstance?

In 2009, Prolotherapy doctors led by Walter Grote MD, published a case history of an 18-year old female patient who returned to sports after a high-grade partial (possibly complete) ACL rupture.

This case report, published in the medical journal International musculoskeletal medicine, documented the successful non-surgical repair of an MRI-confirmed high grade or total ACL tear in an 18 year old female with knee laxity and instability using prolotherapy and at-home exercise. After treatment, the patient regained full knee function, resumed normal activity and returned to recreational sport. Post-treatment MRI revealed a healing chronic ACL tear. These findings are notable given that surgical ACL reconstruction is the conventional treatment for ACL tears with such clinical presentation.

As exciting as this sounds, Dr. Grote and colleagues noted that there were too many factors in this ACL healing to confirm it was caused by Prolotherapy treatment alone. Listen carefully to what this case history presented:

Was the MRI of a complete ACL rupture accurate?

The conclusion: The limitations above prevent a categorical conclusion that prolotherapy alone contributed to or restored pain-free function and improved the appearance of the MRI. However, the facts of this case and the context provided by prior clinical trials suggest that prolotherapy at least augmented the healing a high grade or total ACL tear. These findings further suggest that prolotherapy may be an alternative treatment to surgery for carefully selected patients and should be assessed as a treatment of ligamentous tears, especially in patients who are unwilling or unable to undergo surgical intervention.” (14)

In 2003, K. Dean Reeves, MD published in the journal Alternative therapies in health and medicine (15) these findings:

In January 2017, doctors writing in the Orthopedic journal of sports medicine, wrote of the controversies surrounding repair of partial ACL tears. One of the controversies was reconstructive surgery. In this study the researchers found that biologically augmented ACL-repair techniques (PRP and stem cells)  improve healing and outcomes of both the native ACL (non-surgery) and the reconstructed graft tissue  (surgery).(16)