Physical therapy is a major component of the orthopedist’s “conservative” approach to low back pain relief. The Caring Medical experience is that the results of PT are often disappointing. Disappointing may not be the right word, perhaps dangerous would be better.

What makes physical therapy and its frequent companion treatment chiropractic manipulation dangerous is that they were given to patients who could not benefit. But it wasn’t the therapy that was dangerous, it was the failure to achieve pain relief from it. When these patients went back to the orthopedist and reported lack of success in physical therapy, chiropractic, massage, yoga, etc., the failure of these treatments were used as justification to send that patient to possible unnecessary spinal surgery. That is the danger of the failure of these treatments.

Who would PT and chiropractic manipulation not work for? Let’s look at some research.

An October 2015 paper published in the Journal of Advancement in Medicine by the Department of Physical Therapy, University of Utah, Salt Lake City, wanted to evaluate whether early physical therapy (manipulation and exercise) is more effective than a consultation where the patient were simply given education on rest, activity, and standard care options.(1)

In the study 207 patients with an average age of 37 were monitored and followed up at one year. Here are the study’s learning points:

In the screening process of the study, patients with pain radiating into the knee area and clinical findings suggesting nerve root compression (suggesting lumbar radiculopathy, sciatica) were excluded, as well as patients who had a previous spinal surgery.

Physical therapy for lumbar radiculopathy and sciatica? Why won’t they work? The controversy surrounds ligaments and core muscles

There is much research surrounding low back pain and physical therapy and exercise. The above study was singled out because it appeared in one of the most highly regarded medical journals in the world, the Journal of the American Medical Association (JAMA), and an article on this study appeared in the October 14, 2015 edition of the New York Times. In that article lead author, Dr. Julie M. Fritz is quoted as saying: “Most treatments that are effective have only modest effects. The pattern of low back pain is one of recurrence and remission, and changing that pattern is a real challenge. There are no magic answers.”

And this is what we find at Caring Medical when taking a patient history. The patients will tell us their story of treatment, success, remission, new pain, sometimes worse pain, back to therapy or the chiropractor. They will repeat the cycle until such time as the cycle is broken by pain management medication therapy or a recommendation to surgery.

What they generally do not tell us is that they went to a doctor and that doctor did an examination on their back and hip area looking for instability caused by spinal ligaments and the accompanying muscle weakness, spasm, and low back pain.

There are two sets of muscles in the body: mobility muscles and postural stabilization muscles. 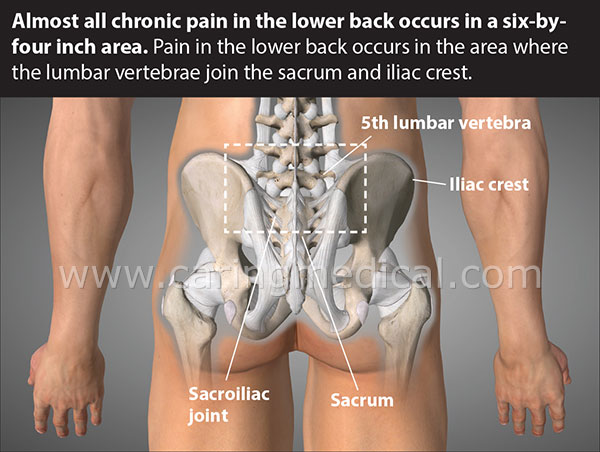 The primary role of the core muscle systems in the lumbar spine and pelvis is to provide segmental control and dynamic stability to the spinal column it cannot be done without strong ligaments.

The lumbar region is well endowed with the core muscles, which play a role in the stability of the spine. These muscles—the abdominal muscles, the psoas major, and the erector spinae—are all actively involved in maintaining the functional stability of the lumbar spine in both upright and sitting postures. Their muscle action is especially crucial during the very high loading that the lumbar spine typically undergoes. Without these muscle forces, such large loads would cause disruptions in the lumbar vertebral column and likely result in spinal instability and severe pain. 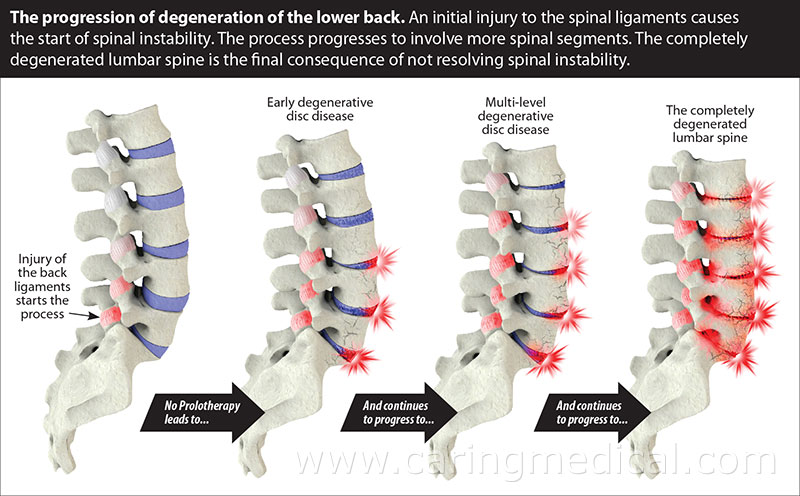 Physical therapy will not make gains without without strengthened, repaired ligaments

Yoga works when there are strong ligaments, yoga will not help when ligament instability prevents muscles from getting needed resistance

Some patients with lower back pain have seen great results with yoga. Some patients have seen poor, none, or worse, results that caused greater injury to the low back. Why do some get benefits and others didn’t? How do some hurt themselves worse? The answer is ligaments.

Let’s first paint a picture by way of a comparison between yoga and physical therapy and the ligament problem.

Research that was published in the July 2017 edition of the Annals of internal medicine (2) helps us shed some light on realistic expectations for Yaga and Physical Therapy. 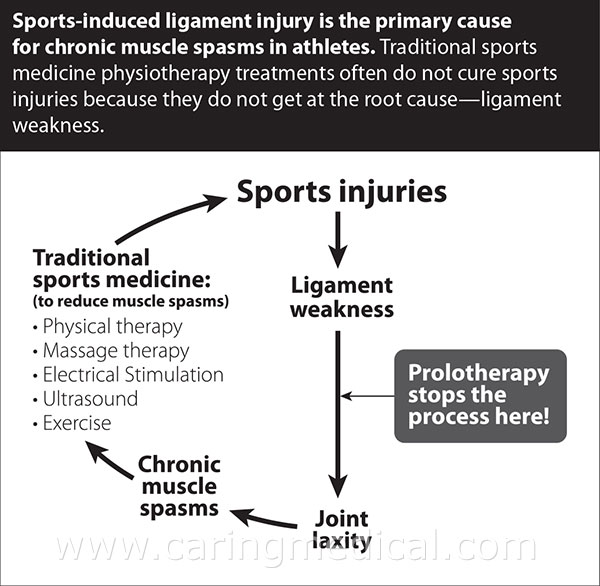 The portions of the above in quotations comes from the Annals of Internal Medicine, patient information recap of the study.

January 2017, a study lead by the University of Maryland published in The Cochrane database of systematic reviews.(3)

In a commentary to the above study, researchers from the United States Department of Veteran Affairs and from Rutgers University published in the journal Explore August 2017 (4), their beliefs that yoga will provide benefits from some patients. This is explained in this statement:

“Even though the evidence was of moderate to very low certainty (that yoga worked for low back pain sufferers), given its relative safety, the trends toward positive results, and the high rates of chronic pain and opioid use, yoga should be considered as a potential approach to include as part of a patient’s care plan for non-specific chronic low back pain. Similar to non-yoga exercise, yoga helps bring movement into the body. However, yoga also supports the development of body-awareness and focus on posture and alignment, as well as assists with physical and mental stress, which may be particularly important in the management of chronic low back pain. “ 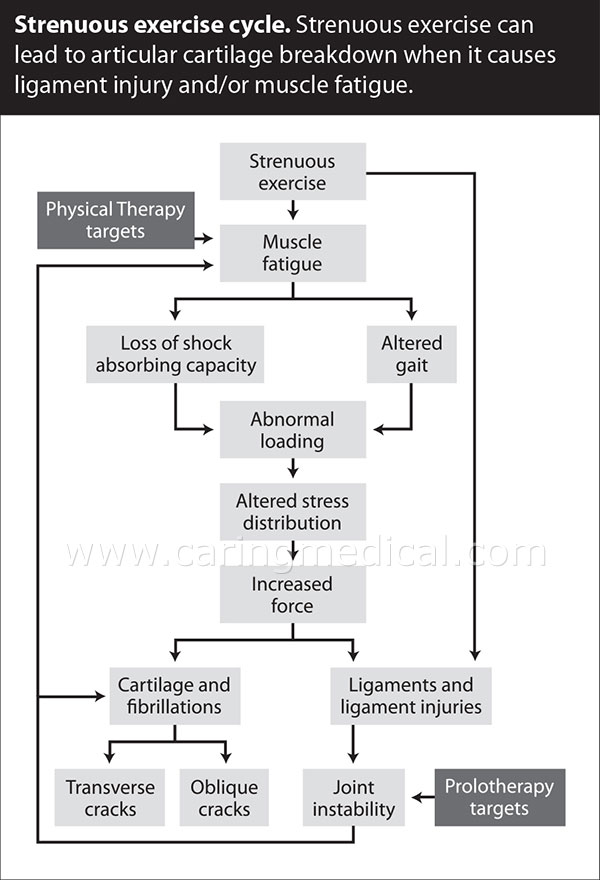 Pilates works when there are strong ligaments, Pilates will not help when ligament instability prevents muscles from getting needed resistance

Pilates is an exercise program that concentrates on the deep stabilizer muscles of the core. Pilates, like physical therapy, like core stabilizing exercises, can only work when the ligaments of the spine can support the exercise activity and provide resistance so the muscles strengthen.

Here is the last paragraph from an August 2017 study in the Journal of exercise rehabilitation:

“On the basis of the present study it can be concluded that lumbar stabilization exercise, dynamic strengthening exercise and Pilates are beneficial in the treatment of chronic nonspecific low back pain for reduction of pain, improvement in functional ability, increase range of motion and improve core strength.

However when compared, lumbar stabilization proved to be more effective form of exercise than Pilates and dynamic strengthening for chronic chronic low back pain.”(5)

They all worked. One a little better than the others in this one group. 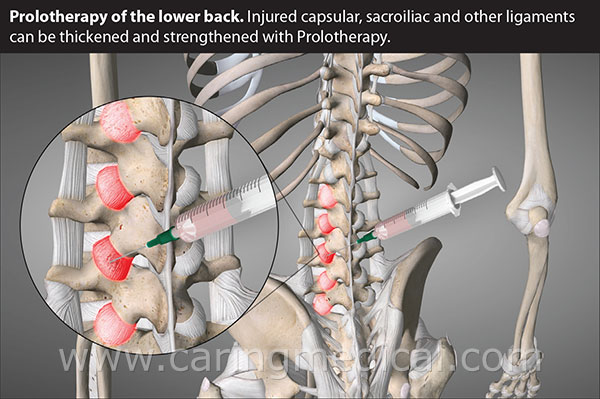 Strengthen the ligaments with Prolotherapy, then physical therapy, Pilates, Yoga will work better

Caring Medical and Rehabilitation Services research: Our paper “A Systematic Review of Dextrose Prolotherapy for Chronic Musculoskeletal Pain,” published in the journal Clinical medicine insights. Arthritis and musculoskeletal disorders made these observations supported by accompanying citations:

The entire content of this article is nicely summed up in these few words. “insufficient stability to permit effective muscle recruiting strategies.” Without the ligaments, physical therapy cannot work.

The next bullet point, from the same research gives the solution:

These patients were treated every three months on average.

In summary, when physical therapy does not work, then the person should consider Prolotherapy.