The Resolution of Grade I Lumbar Retrolisthesis with Prolotherapy: A Case Study. Journal of Prolotherapy. 2010;2(2):352-355.

People want to be healed! For many with chronic pain, they are told there is nothing else that can be done. They are told to live with the pain and cope as best they can. This is simply not true!

In October of 2006, I saw Freddie Smith with a complaint of at least 15 years of chronic low back pain that interfered with all aspects of his life. He was told by a friend that Prolotherapy might be helpful for him. He had been to a number of therapists, trying multiple modalities and different types of medications used in “pain management.” 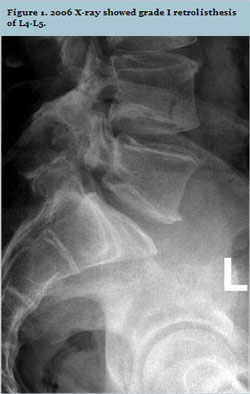 He was spending at least $5,000 per year out of pocket for these modalities. Quite a sum of money in a country with universal health care where people are not used to paying for any of their health care related expenses. He was skeptical of any other treatments and was anxious about any injection therapies, especially when he had to pay for them.

He presented with X-rays from 2006 that showed a grade I retrolisthesis or movement of one vertebra on another at the fourth and fifth lumbar level with associated X-ray damage seen of the facet joints at this level. (See Figure 1.) This is consistent with laxity of the ligaments at this level. Physical examination found tenderness to palpation at the levels of the third, fourth and fifth lumbar vertebrae as well as the right sacroiliac joint. In Canada, a physiotherapist who takes additional training and examinations in orthopedic manual medicine (manual orthopedic physical therapists) is considered an expert in assisting in the diagnosis and recovery of patients such as Freddie. He was also seen by one of six national examiners for manual orthopedic Physical therapy who found areas of hypo (decreased) and hyper (increased) mobility in his lumbar spine as well as various factors related to de-conditioning brought on by his longstanding pain. 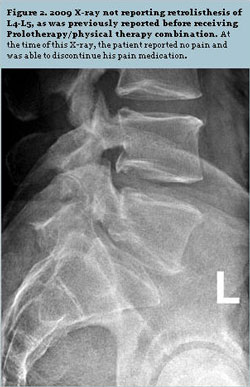 Prior to beginning any injection therapies, I believed he would benefit from such care that would only enhance his response to Prolotherapy. While this treatment was ongoing, I began a course of five neural therapy treatments The area of treatment for neural therapy involved injection of 0.5% procaine without preservative and buffered to a pH of 8.0 to areas identified as interference fields. These are areas of autonomic dysfunction. In this case, I used a form of applied kinesiology known as Autonomic Response Testing to localize the problematic areas and treat. They were areas of previous surgical scars that had a role to play in the patient’s appreciation of pain. If you will, the autonomic component or “nerve” component of the mechanical pain with its foundation in instability. This German technique for balancing the autonomic nervous system is, at times, important to deal with the nervous system component of pain sensation. Once the neural therapy was completed, the addition of appropriate physical therapies primed the patient for success with Prolotherapy. The Prolotherapy solution used was 25% glucose with 1% lidocaine and 0.25% Marcaine® at levels L4, L5 and S1. This was done at monthly intervals, three times, and then again on two occasions five months later. At this point, Freddie no longer had back pain, was able to work and participate in sports and was off all medications! His follow up X-ray report showed no associated retrolisthesis consistent with his absence of back pain! (See Figure 2.) The two X-ray reports were interpreted by two different radiologists.

Read the complete article at the Journal of Prolotherapy.