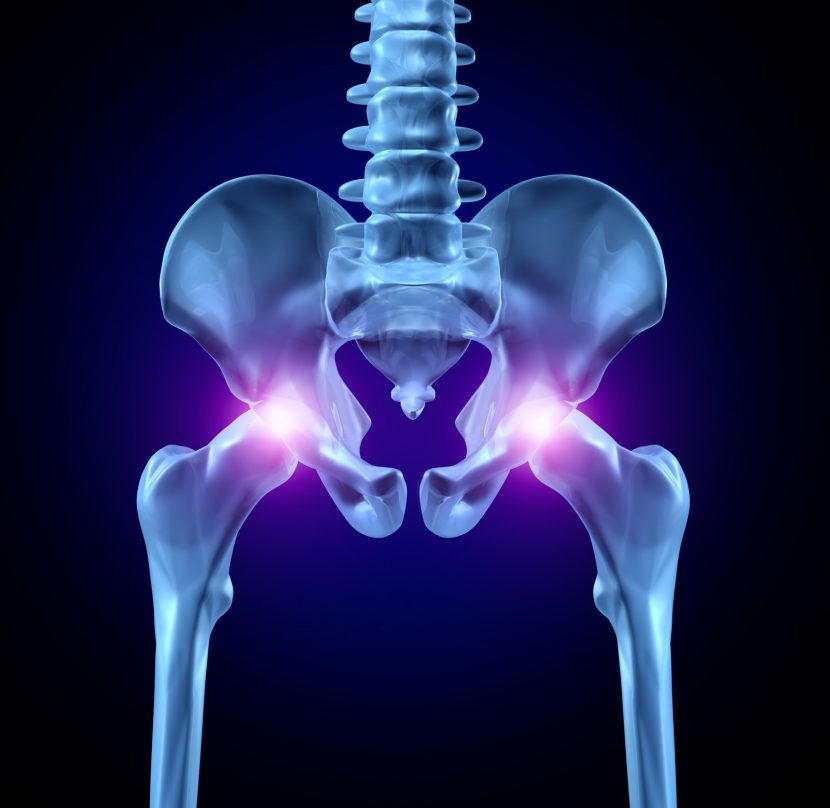 Hip joint pain and injury is one of the more difficult conditions to treat if a patient has let the condition progress for many years without treatment or mobility. One criterion that determines if a pain patient will do well with stem cells is good range of motion in that particular joint.

It is a relatively common occurrence in a stem cell / Prolotherapy practices to see patients under the age of 50 with premature osteoarthritis. Patients typically complain of significant hip and groin pain, especially with exercise.

There are many causes of premature osteoarthritis of the hip.

As hip degeneration increases, normal mechanical load will cause worsening joint instability. Eventually articular cartilage breakdown and bony overgrowths called bone spurs, which are another common occurrence with osteoarthritis or degenerative arthritis will occur.Eventually the pain and hip range of motion will both deteriorate to the point where the patient ‘s activities are severely limited or stopped.

Prior to Hip Replacement – a patient may be recommended to the following procedures:

In a recent study from Australian researchers published in the medical journal Knee surgery, sports traumatology, arthroscopy hip range of motion and  adduction strength (the lateral movement of the hip joint)  were associated with weakened and damaged hip labral tears and considered to be important quality-of-life in patients with labral problems.1 This clearly indicates that patients want repair not tissue removal.

The doctors concluded their findings as having observed no severe adverse events . . .

The research concludes: “Our study has shown that injection of MSCs (stem cells) in different osteoarthritis affected joints is safe and therapeutically beneficial.”2

In the medical journal Clinical medicine insights. Arthritis and musculoskeletal disorders, findings showed improvements in seven patients who had hip, knee or ankle osteoarthritis and who received two to seven stem cell therapy treatments  over a period of two to twelve months. Following treatments the seven patients all reported improvements with respect to pain, as well as gains in functionality and quality of life. Three patients, including two whose progress under other therapy had plateaued or reversed, achieved complete or near-complete symptom relief, and two additional patients achieved resumption of vigorous exercise.3

In study from the medical journal Arthritis & rheumatology doctors found that the repair of subchondral bone (the bone on bone phenomena) lesions and damage, with stem cells, should be considered as the native stem cells in the hip positively respond to the repair stimulus during stem cell therapy.4 The stem cells already in the hip jump started the repair process.

The patient’s X-rays and physical exam confirmed severe osteoarthritis in both hips. In many cases  dextrose Prolotherapy will eliminate all or most of the pain associated with this disease, however, severe cases are more difficult.

In research entitled: “How Much Arthritis Is Too Much for Hip Arthroscopy” doctors try to grade at what point hip damage is too severe for hip arthroscopy and when the patient should be sent to full hip replacement.

When some health care providers see an advanced case of osteoarthritis or a patient after dextrose Prolotherapy treatments have not met the goals of treatment, they may suggest stem cell treatment for hip osteoarthritis.

This is a procedure where the patient’s own bone marrow or adipose fat cells are extracted via a simple procedures. Bone marrow and adipose  cells contain stem cells, cells that differentiate, or change, into any other types of cells in the body, according to what is needed.

The promising results with these studies and the clinical evidence gives hope to those suffering with degenerative hip disease.

Questions about this article can be submitted below – you may also want to consider reaching out to a getprolo.com doctor to get information about a consultation.