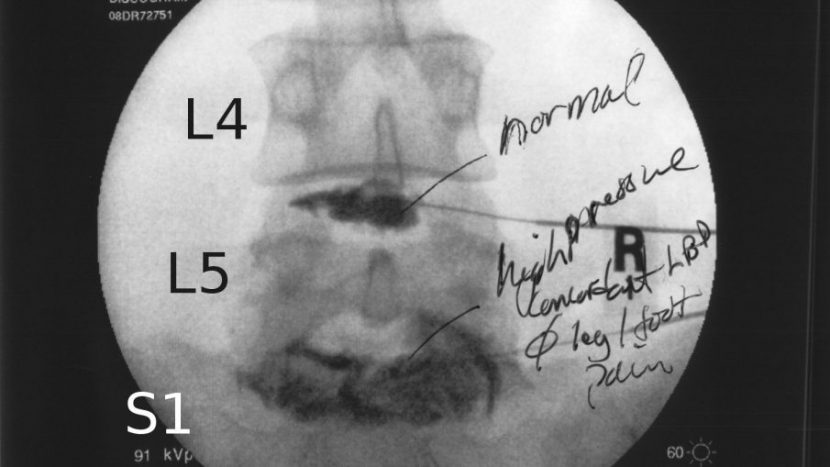 A person with a degenerated, bulging, or herniated disc must realize that this may be a coincidental finding and unrelated to the actual pain he or she is experiencing. A degenerated disc is one that is losing water and flattening. This is a usual phenomenon that occurs with age. It is also normal for a disc to bulge with bending. A herniated disc occurs when the annulus fibrosus no longer holds the gelatinous solution in the disc. The result is a weakened disc. The annulus fibrosus is basically a ring of ligament tissue. In this article we will discuss surgical and non-surgical options for herniated disc treatment.

In a new study, doctors at the University of Salzburg presented these findings on the surgical and conservative care of herniated disc

According to these doctors, when should a patient have disc surgery?

Finally the German researchers suggest that surgery should be the LAST CHOICE, and that all conservative treatment methods must be FIRST exhausted.1

It is important to note that the above paper from spinal surgeons recommended strongly, that surgery be the last choice, BUT, treatments of any kind should not be delayed.

Let’s look at the first choice of herniated disc treatment through the eyes of a Canadian research team who reviewed the current concepts and clinical guidelines for the management of low back pain to assess their quality of care.

In this February 2017 study, doctors and researchers found according to high-quality guidelines:

This new study found some of these guidelines to still be in practice but outdated, specifically the use of paracetamol for acute low back pain and other herniated disc symptoms.

The other problem they found was the recommend education, staying active/exercise, manual therapy, and paracetamol or NSAIDs as first-line treatments., were guidelines targeted to nonspecific low back pain.2

If you are reading this article, there is very good chance you were not helped by the herniated disc treatment guidelines, you have been recommended to herniated disc surgery, and you are exploring alternatives.

What is a successful surgery for herniated, ruptured or bulging disc? For many patients who move onto surgery their definition of success may be based on the following questions and the answers they get from their surgeon:

Conflicting evidence suggests that these may be difficult questions to answer prior to surgery. Or that the patient and the doctor may have two different definitions of success and what should be the goals of treatment. This one concluding statement from a new research study from the University of Leipzig in Germany spells out likely outcomes of herniated disc surgery.

In recap: The surgery was successful for some, did not work better for herniated discs in neck than lumbar disc herniation, and for a “considerable” number of patients long-term high levels of pain remained after surgery.

For working people, one study tried to give a better predictive value for returning to work. In this research in the medical journal Health technology and informatics, in 153 patients doctors found the most decisive risk factors in prolongation of work absence from herniated disc were:

A recent study from doctors in Australia questioned the prevalence of back pain caused by the discs. In their research the doctors noted the widespread belief that up to 42% of chronic low back pain is attributed to a problem lumbar disc(s). BUT, these estimates on the number of pain causing discs largely originated from research conducted 20 years ago and that the estimates may be too high, something else may be causing the pain.

Taking into account all low back pain cases during this study, discogenic pain prevalence was 21.8%. The researchers concluded that while lower than believed the research supported the clinical use of discography.5

The Discography or discogram procedure usefulness a test and evaluation tool is controversial. Like an MRI it may show things that are not the root cause of the problem. In the procedure a dye is injected into the discs to look for cracks or other abnormalities. Sometimes several discs are injected. Like an MRI, the discogram may show damage that are not causing symptoms, so the discogram may be leading doctors to treat something that is not the problem.

A patient may also receive a diagnosis of disc desiccation. This is a common degenerative change of intervertebral discs over time caused by “aging.”

Why did the disc degenerate in the first place?

Degeneration of a disc begins as soon as the lumbar ligaments become loose and cause spinal instability, allowing the vertebral segments to move excessively and cause pain. The body attempts to correct this by tensing the back muscles. The hypermobile vertebral segments add strain to the vertebral discs. Eventually these discs cannot sustain the added pressure and begin to flatten and/or herniate.

The incidence climbs with age, and to a large degree a gradual desiccation is a ‘normal’ part of disc aging. It results from replacement of the jelly like nucleus polposus with fibrocartilage. It should be pointed out that the body is acting in this way to stabilize the spine.

Prolotherapy strengthens the annulus fibrosis and other ligaments that support the disc, helping the condition resolve without surgical intervention. If the disc material is pressing on the nerve, then other treatments in addition to Prolotherapy may be indicated, including nerve blocks or epidural injections to decrease the inflammation on the nerve.

In this research we reported on 145 patients who experienced low back pain an average of 58 months, who were treated on average with four sessions of dextrose (12.5%) Prolotherapy, quarterly, at a charity clinic.

The patients were contacted on average 12 months after their last Prolotherapy session.In these patients:

Results were similar in the patients who were told by at least one medical doctor that there was no other treatment option (55 patients) or that surgery was the only option (26 patients).6

If you have been diagnosed for bulging disc, slipped disc, herniated disc, Prolotherapy is safe, effective, and cost-friendly. It is a low-risk procedure that treats a herniated disc symptoms.