The most common type of ankle sprain is the “rolled” or “twisted” ankle, inversion injury, turning the ankle inward, injuring or tearing the ligaments on the lateral (outer) side of the ankle, usually the anterior talofibular and the tibiofibular ligaments. Many times a patient will report that they simply “twisted” their ankle without realizing the structural damage that could have been done.

The inside of the ankle is held together by a group of ligaments called the deltoid ligament. This ligament is injured from turning the foot outward, as can happen when falling down stairs or mis-stepping. Once an ankle is sprained, the injury may take a few weeks to many months to fully heal. The injured ankle often remains a little weaker and less stable than the uninjured one.

Left untreated, ankle instability leads to cartilage deterioration with resultant degenerative arthritis. If a ligament does not heal, joint instability occurs and the end-result is ankle arthritis with good prospects for fusion or ankle replacement surgery. Treated with  stronger NSAIDs or cortisone shots can also lead the patient to surgery.

Cortisone has been shown to further degenerate the injured ligaments in joints, leading the patient towards more joint instability, degeneration and eventually osteoarthritis. Once diagnosed with osteoarthritis that is seemingly irreversible, the words “ankle fusion,” “ankle arthroscopy,” and “ankle joint replacement” are introduced into the consultation.

We get a good idea who has instability or is at risk for chronic ankle sprain when we see a patient who feels that their ankle is:

They often ask what is causing their “weak ankles,”  the continued “popping,”and “clicking” sound they hear. The patients know the ankle is not right. 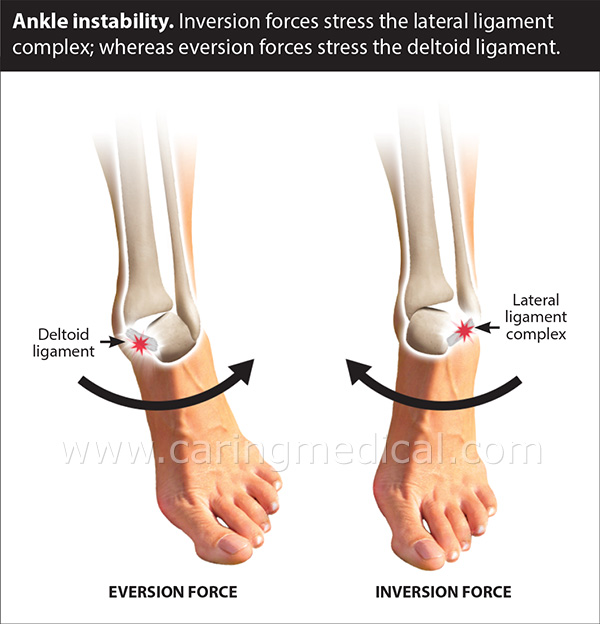 Chronic ankle sprains can be tricky to diagnose and treat. Ankle instability may not show up after the first acute ankle sprain and there is no consensus on how to tell if a patient will have instability in the future. This was addressed by an Irish research team writing in the American Journal of Sports Medicine who among other findings found that patients who could not properly jump or land 2 weeks after their first lateral ankle sprain were high risk candidates for chronic ankle instability.(1)

Unfortunately, literature examining chronic ankle instability is often conflicting and confusing to patients. The Irish researchers were able to identify jumping and landing ability and non-reported ankle pain up to 6 months as being high risk factors for ankle instability, but they were not the only factors.

University researchers in Australia also tackled this problem of identifying the risk factors for ankle instability. In June of 2016 the Australian team published their intent to examine the problems of ankle instability in the medical journal Systematic reviews and correlate available research into a clearer understanding of key factors.. This was what they said:

“Ankle sprains are a significant clinical problem. Researchers have identified a multitude of factors contributing to the presence of recurrent ankle sprains including deficits in balance, postural control, kinematics, muscle activity, strength, range of motion, ligament laxity and bone/joint characteristics.

Unfortunately, the literature examining the presence of these factors in chronic ankle instability is conflicting. As a result, researchers have attempted to integrate this evidence using systematic reviews to reach conclusions; however, readers are now faced with an increasing number of systematic review findings that are also conflicting. The overall aim of this review is to critically appraise the methodological quality of previous systematic reviews and pool this evidence to identify contributing factors to chronic ankle instability.”(2)

In 2017, at the completion of their review, the researchers published their findings in the journal Sports medicine.

Doctors are not sure if ankle sprains ever really heal

Let’s do a medical equation and combine the research of two studies.

Above the German doctors said the simple ankle sprain that looks like it healed should be monitored to prevent it from becoming a potentially complicated sprain which is at risk of transition to chronic ankle instability.

In the British Journal of Sports Medicine researchers say that a new ankle injury is not always a new or  acute one, but one that can be identified as an old chronic injury with an increase in symptoms.(5)

A study from Dutch doctors publishing in the International journal of sports medicine looked at 98 patients with chronic, persistent ankle sprains. MRI revealed signs of osteoarthritis (cartilage loss, osteophytes (bone spurs) and bone marrow edema) were seen in the talocrural joint where the tibia, fibula and talus meet (TCJ) in 40% and the talonavicular joint (TNJ) in 49%. In other words, the ankle joint is making the inevitable voyage from from instability to degenerative joint disease to osteoarthritis.(6)

In the Journal of physical therapy science, Doctors at South Korea’s Sport Science Institute, Incheon National University looked at male soccer players and found the complexity of the problem needed to be solved by addressing the entire ankle joint and not simply a ligament tear or chronic ligament weakness.

Here are their findings:

In two studies from University College Dublin, patients who suffered from an acute ankle sprain were followed and tested for problems of balance. Not only were their injured ankles tested but also the same side knees and hips. At 6 months follow up (8) and one-year follow (9)  up after a single ankle sprain event, patients showed reduced balance that created stress on the entire limb side, hip, knee, and ankle included.

Elastic bandages, tape, do they provide stability and balance or worse?

A team of physical therapists in Spain have published a soon to be released study (April 2018) in the journal Disability and rehabilitation. They wanted to report on their findings surrounding the immediate and prolonged (one week) effects of elastic bandage on balance control in subjects with chronic ankle instability.

My comment here: Short-term, ankle bandages and tape are to be used with caution, long-term, keep the tape and bandage on because there is little else that can be offered. UNLESS, you are familiar with Prolotherapy.

This section will deal with the question, How do you treat a sprained ankle?

In regard to quality of life issues prior to receiving Prolotherapy:

A 59-year-old female patient come into our office with right ankle pain following a lateral sprain. The patient reported she could barely walk without severe ankle pain. 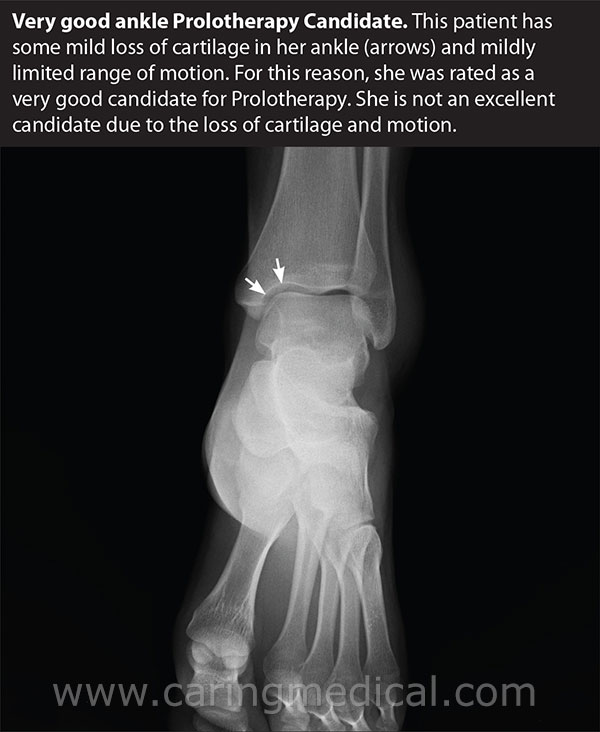 The patient had unsuccessful treatment with cortisone injections and was being recommended to ankle fusion based on X-ray and MRI finding that suggested osteoarthritis, avascular necrosis of the talus, and synovitis. Please see Caring Medical and Rehabilitation published research on bone marrow aspirate injections into the talus and case history of regenerative repair.

The patient received four bone marrow/dextrose treatments over a period of eight months.

A less common but well known ankle injury is the “high ankle sprain.” This is damage to the ligaments  that connect the shin bones tibia to the fibula. Because of the high impact stress at the tibia and fibula junction, the syndesmosis joint, the high ankle sprain is difficulty to heal.

In recent research doctors examined the success of platelet-rich plasma (PRP) into the injured antero-inferior tibio-fibular ligaments (AITFL) in athletes on return to play (RTP). They further studied the issues of ankle instability and stability before and after the PRP ankle injections.

Sixteen elite athletes with AITFL tears were randomized to a treatment group receiving injections of PRP or to a control group. All patients followed an identical rehabilitation protocol and RTP criteria. Patients were prospectively evaluated for clinical ability to return to full activity and residual pain.

Here are the results: